In 2016, the Bel Foundation will finance the daily meals of some 1,700 children at four SOS children's Villages in Haiti, Vietnam, Madagascar, and Mali.

In 2015, Bel employees celebrated the company's 150th anniversary with humor and generosity
through the #saycheese challenge to elicit charitable smiles from around the globe. The
international, viral challenge encouraged people to submit selfies of their smiles to assist the efforts
of the Bel Foundation, which supports initiatives on behalf of children and child nutrition. Bel agreed
to convert the smiles uploaded to its saycheese. groupe-bel.com site into a donation to a charity
supported by the Bel Foundation. As a result of the challenge and the active involvement of the
company's employees, as well as the Bel brands that relayed the campaign around the world,
nearly 50,000 smiles were received and converted into a €150,000 donation to the SOS Children's
Villages France' food program.

"As with all the initiatives supported by the Foundation, the exceptional donation that we are making
today to the SOS Children's Villages program goes hand in glove with our mission to support initiatives
on behalf of children and teens around the world, with a focus on food-related issues," said Bel
Foundation President Antoine Fiévet. "Since the establishment of the Bel Foundation in 2008, we have maintained a close relationship with SOS Children's Villages, having financed various
infrastructure building projects and programs to fight malnutrition in Madagascar and Mali."

The SOS Children's Villages' canteen food initiative is part of the charity's broader food program
and a main focus of its efforts to ensure one of the fundamental rights of children, i.e. having
enough healthy food to eat on a regular basis.

"In many world regions, where access to basic food is difficult and/or school infrastructures are
inadequate or inexistent, SOS Children's Villages builds and operates schools with canteens," said
Gilles Paillard, Managing Director of SOS Children's Villages France. "These facilities are open to
children in SOS villages and the surrounding populations. In these impoverished regions affected by
malnutrition, school canteens provide a daily balanced meal that helps keep the children healthy,
while encouraging school attendance, since the free meals alleviate the temptation of families to put
their children to work. We are sincerely touched by the continuous support of Bel and the Bel
Foundation. Our mission is a long-term one, and it cannot be sustained without the generosity of our
partnering friends."

Since its founding in 2008, Bel's corporate Foundation has sought to financially assist and support
projects on behalf of children and teens, with a focus on food, the core of the company's activity.
The charitable initiatives supported by the Foundation fully reflect Bel's sharing smiles mission. They
also reflect a desire to share and humbly contribute to finding tangible and enduring solutions for
communities.

The Foundation's support is guided by four areas of focus, including fighting malnutrition, building
infrastructure dedicated to better nutrition, developing subsistence farming and market gardens, and
supporting programs to raise awareness about good eating habits.
So far, the Foundation has helped fund 200 initiatives by charities and NGOs with nearly €1.8 million
in total financial assistance. Bel employees are also actively involved with the Bel Foundation, which
has awarded grants for more than 70 charitable projects sponsored by Bel employees around the
globe.

SOS Children's Villages, a lovely home for every child

SOS Children's Villages' mission is to provide care for children with no parental support or who are at
risk of losing it, in France and internationally. Its goal is to provide children with family care by hosting
brothers and sisters who lack parental support at its children's villages, or by strengthening families
through programs to prevent child abandonment, in accordance with the United Nations' November
2009 Guidelines for Alternative Care of Children.

Active in 134 countries and territories, SOS Children's Villages International provides care for nearly
80,000 children and youths at 560 children's villages. With nearly 2,400 social, educational and health
initiatives, the organization reaches over a million and a half beneficiaries through its special services and daily care programs. SOS Children's Villages is a non-political, non-denominational nongovernmental
organization. It has a consulting role on the UN Economic and Social Council. 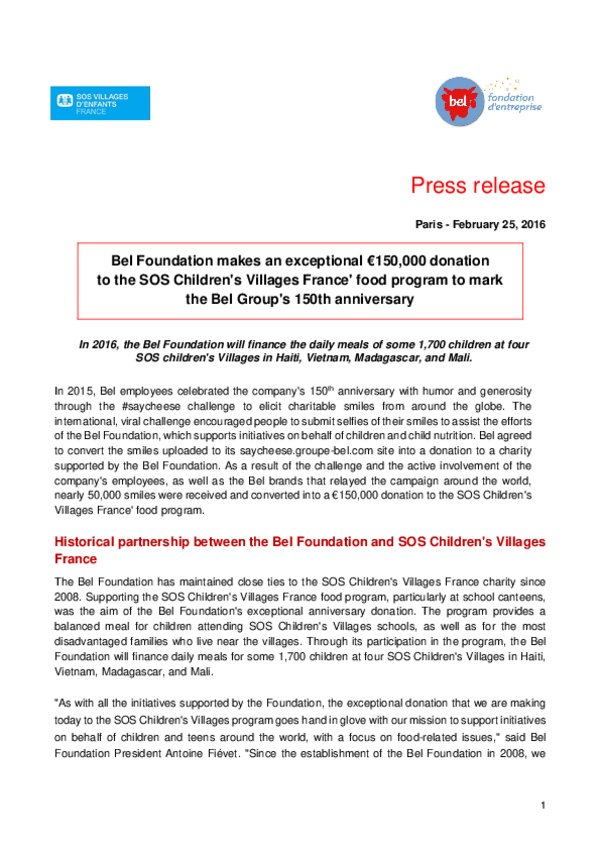